U.S. construction industry leaders’ confidence diminished somewhat in July 2019, yet they remain optimistic regarding nonresidential construction’s near-term prospects, according to the Construction Confidence Indexreleased today by Associated Builders and Contractors.

While contractor confidence regarding sales, profits and staffing levels declined for a third consecutive month, all three principal components measured by the survey remained well above the diffusion index threshold of 50. More than 60% of contractors expect sales to increase over the coming six months, while more than 56% expect staffing levels to increase and 52% expect profit margins to expand.

“Contractor confidence is behaving as expected during the latter stages of a construction spending cycle,” said ABC chief economist Anirban Basu. “While the average American nonresidential contractor remains busy, the July CCI data suggests an oncoming inflection point in trends. And according to available construction spending data, some softening in the pace of growth has already begun.

“That said, the near-term remains bright,” said Basu. “While the greatest challenge for many contractors remains completing work under contract given significant skills shortages, contractors collectively expect to continue to expand staffing levels in the context of increasing sales. Perhaps most impressively, despite rapidly growing compensation costs, the average contractor expects that profit margins will continue to rise over the next six months, consistent with a substantial appetite for construction services for the balance of the current year and into 2020.” 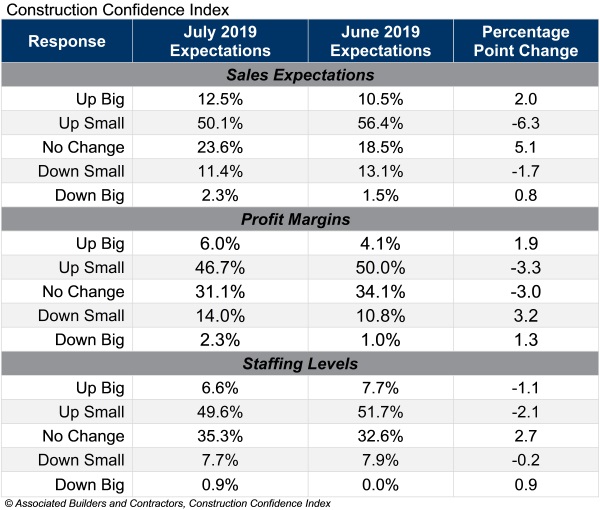 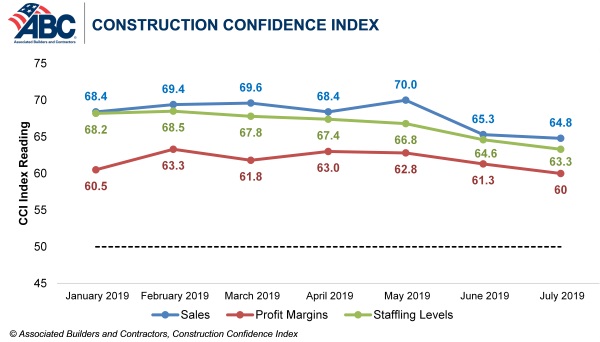