Falling energy prices accounted for much of the year-over-year price decline. Among the eight subcategories that decreased, the most significant were in natural gas (-31.8%), crude petroleum (-29.8%) and unprocessed energy materials (-26.3%). Monthly natural gas prices, however, were up 7.7% from September, likely due in part to seasonal factors. Two other subcategories had year-over-year decreases greater than 10%: iron and steel (-16.1%) and steel mill products (-13.1%).

“New month, same story on materials prices,” said ABC Chief Economist Anirban Basu.  “While the decline in crude petroleum prices in October may have been caused by a spike in oil prices in September due to an assault on Saudi facilities, price weakness was apparent in several other materials categories as well. Many categories experienced effectively no change in price whatsoever on a monthly basis, including key materials such as softwood lumber, concrete, plumbing fixtures and the segment that includes prepared asphalt.

“While the U.S. nonresidential construction sector remains busy and a majority of contractors expect to see an increase in sales over the next few months, according to ABC’s Construction Confidence Indicator, materials prices continue to languish due to a combination of a weakening global economy, a sturdy U.S. dollar and recently observed declines in investment in structures. The lifting of tariffs on certain producers of steel and aluminum earlier this year may also be playing a factor, with iron and steel prices down approximately 16% compared to one year ago and the price of steel mill products down more than 13%.

“Contractors can expect more seesawing in materials prices going forward as opposed to smooth declines,” said Basu. “There is evidence that certain parts of the global economy are firming, which will help stabilize the demand for certain materials.  The U.S. dollar is no longer strengthening as it had been, in part because the Federal Reserve has pursued an easier money policy this year. That said, there could be a dip in oil prices next year as more supply comes online from nations such as Canada, Norway, Brazil and Guyana.” 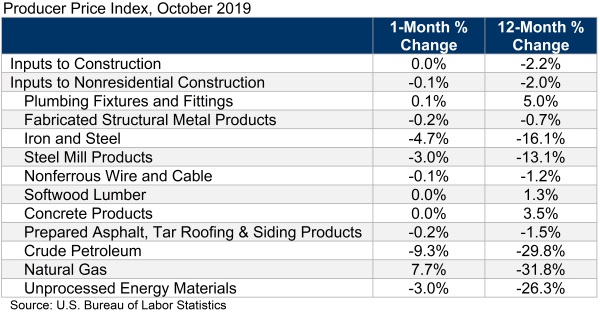 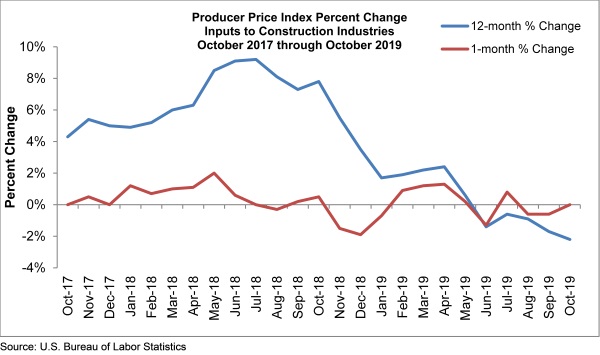