The construction industry added 20,000 net new jobs in December 2019, according to an Associated Builders and Contractors analysis of data released today by the U.S. Bureau of Labor Statistics. On a year-over-year basis, industry employment has expanded by 151,000 jobs, an increase of 2.0%.

Nonresidential construction employment increased by 16,700 jobs on net in December and is up by 100,600 net jobs during the last 12 months. There were job gains in all three major nonresidential segments: Nonresidential specialty trade contractors added 9,800 jobs; nonresidential building, 5,100; and heavy and civil engineering, 1,800.

The construction unemployment rate was 5.0% in December, down 0.1 percentage points from the same time last year. Unemployment across all industries was unchanged at 3.5%.

“This was another very good jobs report, though many analysts will emphasize some of the weaker points,” said ABC Chief Economist Anirban Basu. “For instance, the today’s reading came in at 145,000 net new jobs in December, short of the consensus estimate of an additional 160,000 jobs. Moreover, wage growth on a year-over-year basis was a bit softer than expected, and many of the jobs added in December were in lower-wage segments.

“However, this level of wage growth remains sufficient to fuel the current consumer spending cycle while helping to contain inflation, which keeps the cost of capital low,” said Basu. “Among other benefits, this supports the efforts of developers and others who purchase construction services. This dynamic allowed construction to generate 20,000 net new jobs in December—the majority of which were in the nonresidential construction sector— while sustaining a healthy level of backlog, according to the ABC Construction Backlog Indicator.

“The implication is that demand for construction services will remain elevated over the next few months,” said Basu. “The primary challenge will continue to be the hunt for high quality workers, especially as the majority of nonresidential contractors intend to increase staffing levels over the next six months, according to ABC’s Construction Confidence Index. With home builder confidence hitting a 20-year high in December, nonresidential contractors may find that competition for workers with residential builders will become even fiercer. Recent data indicate that nonresidential construction spending is no longer expanding rapidly, and this may be due in part to the fact that the industry is approaching its output ceiling due to a shortage of available workers.” 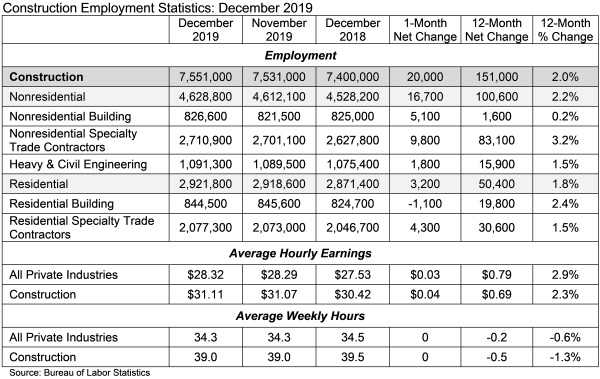 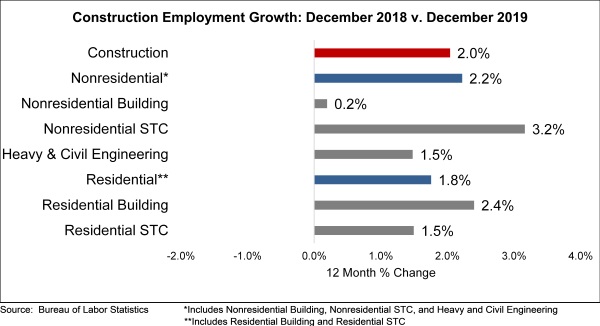